We’re delighted to share the below article from the Oswestry and Border Counties Advertizer, regarding Greggs Oswestry site manager, Will.

A man dedicated to customer service is one of the latest nominees for the Advertizer Business and Community Awards.
Will Lander, 28, has been site manager at the Greggs store in the Esso station on Shrewsbury Road, Oswestry, since it opened two years ago.
The former Marches School pupil has been nominated for the customer service award, which celebrates those who show a creative and dedicated approach to their work.
Of being nominated for the award, Will said: “It’s really nice – not something I expected. It’s nice to be recognised.”
The award nomination is especially satisfying for Will as he said customer service was the most important aspect of his job. He also told of what he likes best about his role: “It’s working with the team we have at the site but our customers as well because we have a lot of regulars who come in every day,” he said.
Will was nominated by Sue Thomas, of Gobowen, who is a regular customer. “This young man is the epitome of perfect customer service. He goes out of his was to ensure every customer is treated so efficiently,” she said.
“He is a true credit to his company; he makes me smile and brightens the day.” 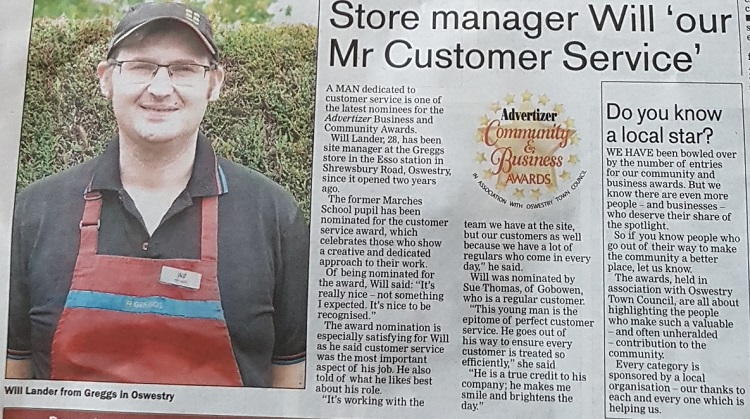